﻿3 Ways To Avoid Derailing Your Train To Success 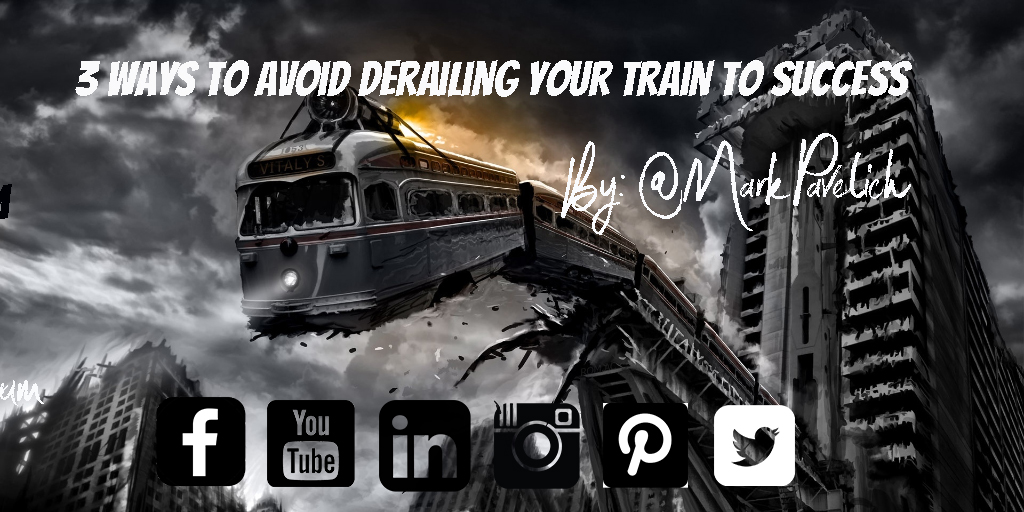 People give up.  When the going gets rough, the tough get going.  But most people aren’t tough.  Not mentally.  They find excuses.

Did you ever play Tetris?  As the game progresses, the pieces fall on the screen faster and faster, but you’re progressively getting better, adapting to the game speed.  You’re in-step with the spatial placement of the pieces.  You adjust them directionally— as needed.  You are one with the game, in harmony.  But sometimes, mistakes happen.  A roadblock, or perhaps a lapse in judgement, has made the next move (or moves) substantially more difficult.

So you hold the D-Pad down, and just sabotage the game.  It’s a tantrum, and you may regret it later, but it temporarily feels good.

We know the consequences to our actions, yet we repeat the same thing, over and over, and fate shows us it’s cruel hand of predictable consequence, inevitably.

Don’t study before the quiz.  See what happens.  Stay up all night before an important meeting.  See how sharp you’ll be.  Eat like a human trash can after setting out a fitness goal.  You won’t reach it.

Discipline is something that almost every mentally strong person has.  Those with mental fortitude often push through, and they do so by following these 3 main principles:

1. Trust the process.  It’ll all be worthwhile.

The things that come easily, are often less enjoyable.  There’s pain in the recipe to success.  You’ll have lots of heartache and heartbreak, setbacks that will tempt your resolve, and have you contemplate giving up.

Just remember that these feelings of discomfort, pain, disappointment, sorrow, agony, anxiety, doubt… they’re temporary.  Someday, you’ll look back on everything and it’ll all be a distant memory.  You won’t remember the pain.  Sure- you may remember experiencing it, but you won’t feel it in the future.  And it will make your successes taste even sweeter.

Trust the process.  Push through the struggle.

Entrepreneurs are dreamers.  They’re a lofty bunch, aspiring for bigger and better, and often thinking that the sacrifice (as in the previous point) will lead to the goal or the dream.

You can enjoy later, but if it’s all for a future and there’s no enjoyment now, and the present is simply anxiety and devotion to an eventuality, then what’s the point?  Don’t you deserve to live today?

As much as it’s important to stay the course and live for tomorrow, you do need to live in the now as well.  Imagine, spending a lifetime chasing a goal, but by the time you get there, you’re so unhappy and broken, that you’re unlikely to be able to enjoy the fruits of your labour.

3. Stay the course (Don’t get sidetracked).

There will most definitely be days where you start the day on the wrong foot.  You may have clouded thoughts, due to unforeseen circumstances, personal drama, or any number of things which could affect your performance.

You have to act like a professional, no matter how difficult it may be at times.

You had a fight with your significant other, and you’re going to let it bleed into other aspects of your life.  For all you know, the fight may be resolved automatically, and meanwhile you’re allowing it to affect your goals.  You’re focusing on something that may be inconsequential and insignificant.  It’s worrying over something that may not even happen.  Your spouse was upset with you.  It doesn’t mean that they will forever be.  AndyYou cancelled a meeting (an important one) because you’re in your feelings.  You weren’t present during parts of your day where you needed to be, for the sake of your goals.  Snap out of it.  Get over yourself!

When you have a goal in mind, stay on track.  Life happens, but you won’t accomplish what you want to if you aren’t laser-focused.


Following these principles will help build a foundation of stability and a greater certainty that you’ll be able to overcome common obstacles on your path to success.

Roads aren’t always pathed for us.  Often, they’re unlit, windy, bumpy… but with discipline, we can navigate through them.

HAPPY SATURDAY MARKET DAY! With extra safety measures in place to keep everyone safe, we are open until 3pm today!
Please remember that face masks or face coverings are mandatory inside the market. See you soon 🎄
#myosfm #oldstrathcona #oldstrathconafarmersmarket
#yeglocal

🎬#UrbanSmiles with #YegDentist @DrRobAndrew
#NightLase can reduce the effects of and decrease the amplitude of snoring by means of a gentle laser treatment of the mucosa tissue. #Edmonton #Alberta #Canada
🎥https://t.co/4Jf64iFNbq
📲 (780) 989-6030

We are proud to announce our participation with @MakeAWishNAB and their #CalendarOfWishes. We're helping to create life-changing wishes for kids with critical illnesses. Read more here:
🎄https://t.co/zm32CB7HHI
🔺#CrystalGlass